The first official replica, ie copy the model of previous years, was released in 1985 - it was a copy of the model 1937.

In 1988 he was issued a copy of the lighter 1933. At the bottom it was misspelled «ORIGINAL 1932 REPLICA». After a few years, someone in the company realized that the very first Zippo was made and will be available only in 1933, and had to correct the mistake and issue a new model replica that has been "1933 replica» :) 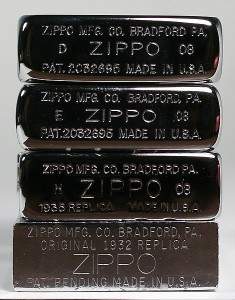 This entry was posted on Tuesday, November 4th, 2008 at 23:27 and is filed under Replica Zippo . You CAN Follow any Responses to this entry through the RSS 2.0 feed. You can skip to the end and leave a response. Pinging is currently not allowed.